It’s been a pretty good month for Drew Barrymore. Considering Drew Barrymore‘s new fianc? Will Kopelman is an art consultant, it’s no surprise that the actress’ brand-new engagement ring is truly, well, a work of art. 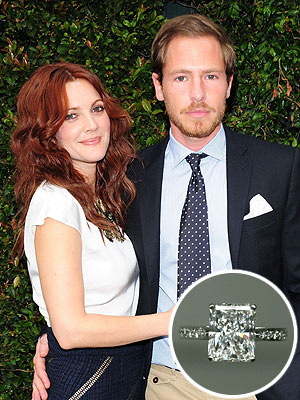 Drew Barrymore’s engagement ring finger is once again sporting a diamond – and if her official engagement photo is any indication?

The ring features a colorless radiant-cut diamond — which weighs in at just under 4 carats — situated on a diamond-covered band. The stunning sparkler was designed by Graff Diamonds,yes, THE Laurence Graff-owned bling-house that holds some of the world’s most valuable rocks) – and while 4-carats isn’t the largest celebrity shiner we’ve seen by far (Beyonce, anyone?) the $120,000 estimated price tag is certainly Barrymore-esque, to say the least.

Kopelman and Barrymore have been linked romantically since February of last year. The couple got engaged in Sun Valley, Idaho, while vacationing over the holidays.